Auctions are a delivery method with the goal of generating the most revenue for each ad impression. Effectively, rather than picking an ad randomly via a lottery system, it calculates the expected revenue (eCPM) you'll make for each ad and selects the ad that'll deliver the highest return. 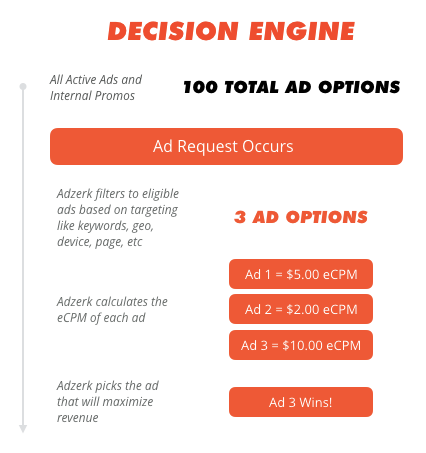 Adzerk uses effective Cost-Per-Mille (thousand impressions), or eCPM, to calculate the value of each ad in auction. It's the historical revenue of an ad per 1000 impressions:

If your flights use a CPM rate, the eCPM is the same as CPM because each impression generates the same amount of revenue. However, if you are charging on a cost-per-click (CPC) or cost-per-action (CPA) basis, revenue is not derived from impressions, so eCPM has to be calculated using click-through-rate and/or conversion-rate:

Normalizing revenue into eCPM is useful for two auction situations:

Just because an advertiser is paying a higher CPC doesn't mean they'll generate the most revenue. In the scenario below, the $1.00 CPC bidder actually makes 150% more than the $2.00 bidder because their click-through-rate (CTR) is so much higher:

Flat rate flights can also compete in auctions, but their eCPMs cannot be calculated. Instead, a fixed eCPM must be used.

How Adzerk Calculates eCPM For Auctions

To calculate the eCPM, we use the:

We then multiply this eCPM by the multiplier value (if applicable).

If a flight is still in burn-in mode, we will use the default eCPM specified on the flight.